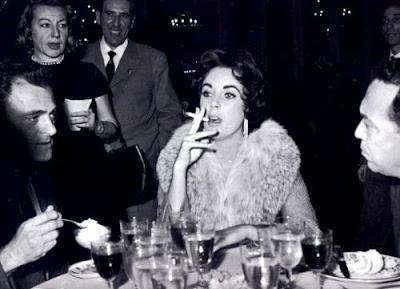 KIM KARDASHIAN: You are my idol. But I'm six husbands and some big jewels behind. What should I do?

ELIZABETH TAYLOR: I never planned to acquire a lot of jewels or a lot of husbands. For me, life happened, just as it does for anyone else. I have been supremely lucky in my life in that I have known great love, and of course I am the temporary custodian of some incredible and beautiful things. But I have never felt more alive than when I watched my children delight in something, never more alive than when I have watched a great artist perform, and never richer than when I have scored a big check to fight AIDS. Follow your passion, follow your heart, and the things you need will come.

KK: For this story, we were inspired by Cleopatra. What's your advice on how to be a queen?

ET: I have never wanted to be a queen! Cleopatra was a role, and I am an actor, so it was fun to play one, but it's not real. The real Cleopatra had an incredibly complicated life, and she had to be very, very canny to survive as long as she did. For me, the most interesting thing about her was her passion. The things that are important to me—being a mother, a businesswoman, an activist—are all things that were borne out of great passion.

KK: I am a huge Elizabeth Taylor nerd, as will now become clear. You have the world's most iconic jewelry collection. Of your three most famous diamond rings— a 29.4-carat from Mike Todd, the Krupp diamond at 33.19 carats, or the Taylor-Burton 69.42-carat diamond—which one meant the most? Does size matter?

ET: The Krupp is an extraordinary stone. It has such life and brilliance when light shines through it. Size does matter, but so does the size of the emotion behind it.

KK: What has been your greatest jewelry adventure?

ET: I have had many. I was especially thrilled to buy the Prince of Wales plume pin at the 1987 auction of the jewelry of the Duchess of Windsor. Richard and I had once admired it, so much so that he asked the duchess if he could copy it for me. She very graciously agreed, but we both felt weird about it, so we didn't. And then when it finally came up for auction, I really felt I wanted to have it in my collection—because I admired her great style so much, because Richard had wanted me to have the brooch, and, frankly, because the money from the sale went to support AIDS research. I bid from my house in L.A., and when they told me I had won it, I thought, Yes, this was really meant to be in my care, at least for a while.

KK: What are your personal favorite looks, on- or offscreen?

ET: I loved the Edith Head lavender dress that I wore to the Oscars in 1970. It was designed around the Taylor-Burton diamond. Some of the Cleopatra costumes were fun—they even had real gold threads—and I wore them as evening dresses afterward! I also loved some of the great caftans that I wore in the '60s and '70s with big sunglasses and major jewelry. I love to be casual and comfortable, but I also love the easy glamour of wearing jewelry all the time.

KK: It is coming up on the 20th anniversary of your classic fragrance, White Diamonds. Could you have imagined it would do so well? How does a lady smell good for life?

ET: I always wanted to have a fragrance, and I always wanted to be able to connect with people in ways other than through film. Fragrance is an incredibly intimate thing. It can evoke very specific thoughts or memories and is a little different for each person who wears it. I also think it's the most accessible luxury. I had no idea that White Diamonds would become a classic when we began, but I am thrilled it has because it means we have really succeeded in giving women a little bit of luxury every day. It is very special to me, and we certainly plan to celebrate this anniversary all year!

KK: You have starred in movies with some of the dreamiest men of all time: Rock Hudson, Montgomery Clift, Marlon Brando, James Dean, Paul Newman, Michael Caine, and Warren Beatty. Who else would you have loved to work with?

KK: Do you think if Richard Burton were alive today, you'd be married to him?

ET: It was inevitable that we would be married again, but it's not up for discussion.

KK: You have always been ahead of your time—and now you're on Twitter. What do you love about it? And [cheekily] will you please follow me?

ET: I like the connection with fans and people who have been supportive of me. And I love the idea of real feedback and a two-way street, which is very, very modern. But sometimes I think we know too much about our idols and that spoils the dream. So, like all things, it is to be used with care! Yes, of course I'll follow you, love.