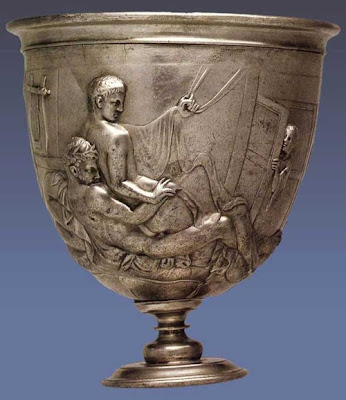 It was most probably commissioned from Greek craftsmen in 1-20 AD (or the first century AD in general) by a Roman client, perhaps during the Hellenising reign of Nero. It was made in five sections: the main bowl which was hammered thin from inside and subsequently finished off from the outside to produce the figures in low relief, a separate plain inner liner bowl of thicker sheet silver with a solid rim (to make the cup easier to use and to clean), a base in solid silver, a cast foot soldered to the base, and two handles (how they would have appeared can be seen in an intact example of a skyphos here,and right).

The cup shows signs of having been used over an extensive period; the handles are missing, and the gilding that may have been applied to certain features has been lost, but it is otherwise in an excellent state of preservation. Representations of sexual acts are widely found in Roman art, although more heterosexual scenes have survived than homosexual ones and such cups were intended as dinner-party conversation pieces, usually made in pairs.