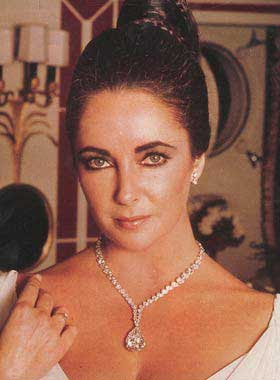 The Taylor-Burton diamond gets it's name from the renowned Hollywood actress Elizabeth Taylor and her former equally renowned husband and actor Richard Burton.

Burton lavished extravagant jewelry on Liz throughout their relationship, one of which was this extraordinary colorless diamond, which he purchased in 1969, and not being named previously, was given the rare privilege of naming it after him and his beloved wife.


Characteristics of the diamond

The diamond is a 69.68-carat pear-shaped, G-color, colorless stone with a clarity grade of VS-2. The current estimated value of the stone is $ 3.5 million. 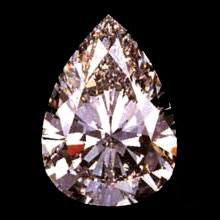 The diamond was cut from a 240.80-carat rough stone discovered in the De Beers Premier diamond mine, in Transvaal, South Africa in 1966. The rough stone was purchased by Harry Winston Inc. of New York.

After the arrival of the stone in New York, Harry Winston and his cleaver, Pastor Colon Jr. made an exhaustive study of the stone, both internally and externally, that lasted about six months. The prolonged exercise was aimed at determining the exact cleavage plane, along which the diamond could be cleaved, in order to get two pieces, that could be subsequently cut and polished into the ideal products, with the minimum of flaws and inclusions. Having decided on the cleavage plane, markings were made to indicate the same. Finally, on the appointed day and time, under the glare of television lights, and amidst the usual tension associated with such a delicate operation, the stone was cleaved into two, a smaller piece of 78 carats and a larger one of 162 carats. According to the projections the 78-carat piece was expected to be transformed into a finished diamond of about 24 carats, and the 162-carat piece would have metamorphosed into a pear-shaped stone of around 75 carats. The faceting and polishing of each of the pieces then began in earnest, and the 162-carat rough was eventually transformed into the 69.68-carat, pear-shaped, flawless, and colorless diamond.

In 1967, Harry Winston Inc. sold the diamond to Mrs. Harriet Annenberg Ames, the sister of Walter Annenberg, former ambassador of the United States of America in the United Kingdom, during the tenure of Richard Nixon as President. But, Mrs. Harriet did not enjoy owning the diamond for long. Whenever she wore the ring in which the diamond was set, she was overcome by a fear, that someone would detect the diamond, and attempt to snatch it away from her, given the enormous value of the stone. She was tended to keep her gloves on always for fear of exposing the diamond. She said that being an extremely sociable individual, she did not enjoy that feeling. Therefore she decided to keep the diamond in a vault, and finally made up her mind to dispose of it, as it seemed foolish to keep it, if she could not use it freely. Thus two years after she purchased the stone, she sent it to Park-Bernet Galleries in New York to be auctioned on her behalf.

The diamond was put up for auction on 23rd October, 1969, with the provision that whoever buys the stone, would have the privilege of using his or her name to christen it .Before the actual sale, speculation was rife in the media as to who would bid for the stone. Several international names were mentioned, including that of Elizabeth Taylor and her husband Richard Burton. In fact the diamond was flown from New York to Switzerland and back under tight security precautions, in order to enable the celebrated couple to have a preview of the diamond.

The auction house was packed with all the well known figures in the international gem and jewelry trade or their representatives. The bidding began with the initial figure of $200,000 announced by the auctioneer. The bidding process was competitive, and the price of the diamond steadily increased until it reached $500,000. Subsequently the bids increased by $10,000 each time until the price of $650,000 was reached, when only two bidders still showed any interest. They were Al Yugler, representing Richard Burton, and Robert Kennan, the chairman of the Board of Kenmore Corporation, the owners of Cartier Inc. When the bidding reached $1,000,000 Al Yugler dropped out and the auctioneer brought down the hammer in favor of Robert Kenmore, for the record price of $1,050,000. After the successful bid Kenmore named the diamond "Cartier." The previous record for a jewel was set in 1957, when a diamond necklace from the Rovensky estate was sold for $305,000.

It is interesting to note that besides Richard Burton, there was another famous under bidder at the sale. This was none other than Harry Winston who was the original owner of the diamond. Burton, in spite of loosing out at the competitive auction, did not loose hope , and was determined to acquire the diamond at any cost in order to lavish it on his loving wife. Therefore he opened direct negotiations with the agents of Cartier. and eventually Robert Kenmore agreed to sell the diamond to the Burtons for a price of $1,100,000 on the condition that Cartier was allowed to display it in New York and Chicago. Cartier's made a profit of $50,000 on this transaction, and they agreed the diamond to be renamed Taylor-Burton.

At the exhibition of the diamond in New York, it was reported that more than 6,000 people a day flocked to review the million-dollar diamond. The original setting of the diamond was a ring...


... but Elizabeth thought it was too big and had it re-set in a necklace designed by cartier, featuring a number of smaller pear-shaped diamonds. 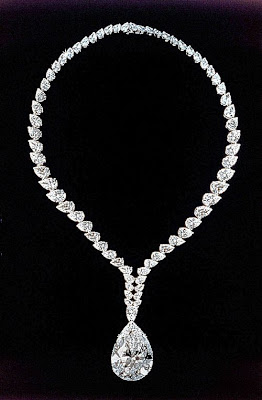 The necklace was flown from New York to Nice, in the company of two armed guards hired by Cartier and Burton. Elizabeth Taylor wore the Taylor-Burton in public for the first time when she attended Princess Grace's 40th birthday party in Monaco, and she often wore it with the ring bearing the Krupp diamond. In the year 1970 she wore both the Taylor-Burton and the Krupp diamond for the annual Academy Awards ceremony. 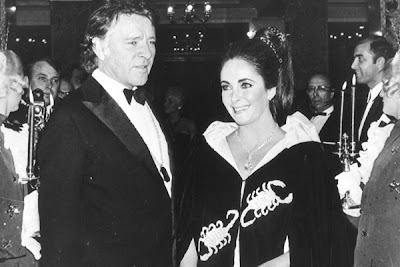 The relationship between Elizabeth Taylor and Richard Burton was characterized as a fire-and-ice relationship, which began on the sets of Cleopatra in 1961, while both of them were married to others at the time. The passionate and intense love between the two actors was clearly evident to all those who worked on the movie sets. Eventually, Burton divorced his wife Sybil Williams and Taylor divorced her husband Eddie Fisher. The two of them finally got married in 1964. Even though their marriage did not go down well with their fans, and sent sensational shock waves around the world, the intensity of the love between them was undeniable. 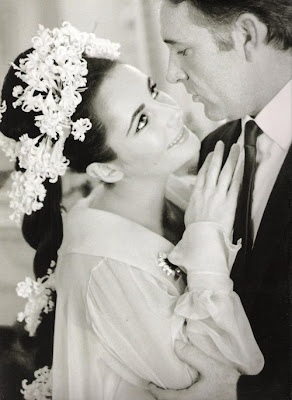 As a devoted husband, who was passionately in love with his wife, Burton lavished extraordinary jewelry on Liz, throughout their relationship. Burton's attachment to his wife was so intense that at one time he said, "I cannot see life without Elizabeth. She is my everything-my breath, my blood, my mind and my imagination."

Last transaction and present owner of the diamond

In 1978, Elizabeth Taylor sold the Taylor-Burton diamond, and donated the proceeds to help build a hospital in Botswana, South Africa. "I have never thought of my jewelry as trophies," Taylor said, "I'm just here to take care of them." Henry Lambert, the New York jeweler was reported to have purchased the Taylor-Burton diamond, for a sum of $ 5,000,000. In December 1979, Lambert had sold the stone to it's present owner Robert Mouawad, who had the stone slightly re-cut to it's present weight of 68.07 carats. The Taylor-Burton is presently the 10th largest diamond in the rare and magnificent collection of diamonds belonging to the Mouawad family.