death of a genius

He died two days later, at age thirty-seven. In late 1888, van Gogh, desperate and growing increasingly unstable, had confronted his friend Paul Gauguin with a knife, before using it to cut off part of his own ear. He was taken to a hospital, where he remained in a delirious state (the locals called him “the redheaded madman”) before committing himself to an asylum in Saint-Rémy-de-Provence. Here, the artist painted one of his most beloved works - The Starry Night. And ironically, it was while van Gogh was in an asylum that interest in his work actually began to build, drawing attention from men like Monet and Pissaro. He left Saint-Rémy in May 1890 to stay in Auvers-sur-Oise, where he spent the last days of his life.

On July 27, 1890, van Gogh shot himself in the chest with a revolver, though the initial impact did not kill him; in fact, he walked all the way back to the house where he had been staying before an infection began to take effect. His brother Theo, one of the few people with whom van Gogh remained in close correspondence with all his life, visited him before his death.
His last words were, according to Theo: "The sadness will last forever."

In his entire lifetime, Vincent van Gogh sold only one painting (Red Vineyard at Arles). 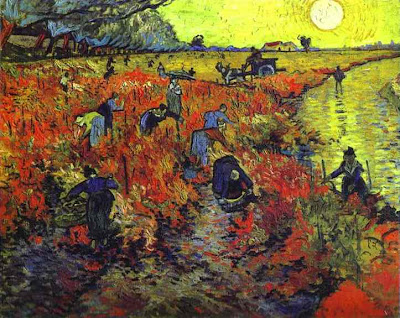